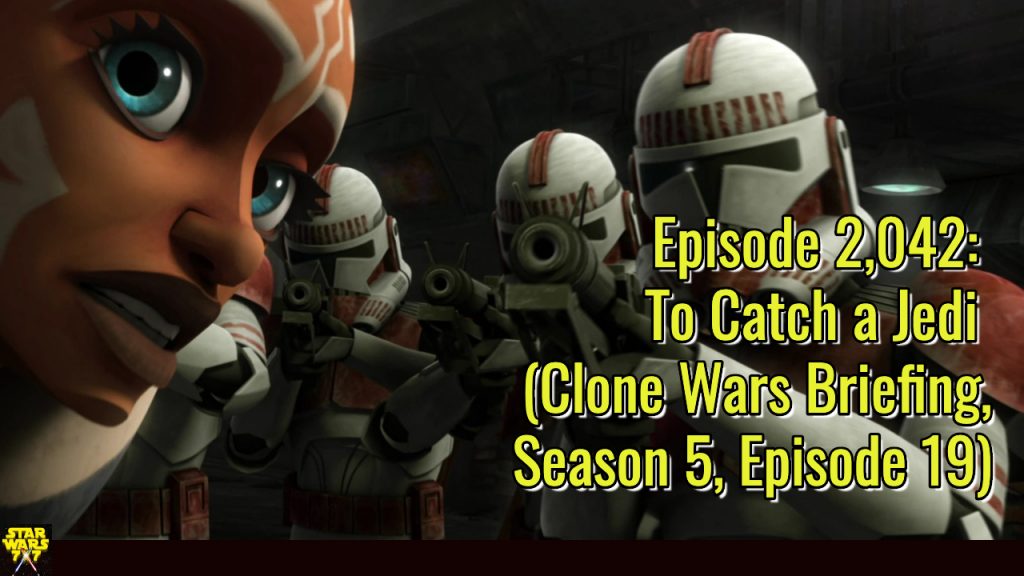 Again with the Alfred Hitchcock-inspired titling! But To Catch a Thief doesn’t offer any clues to the events of “To Catch a Jedi,” which is episode 19 from season 5 of the Clone Wars animated series, and the third of a four-episode story arc that will conclude the season (after episode 20, “The Wrong Jedi”).

Ahsoka is on the run, and the murders for which she’s been framed – plus the presumption that she has something to do with the Jedi Temple bombing herself – are being described as an act of “sedition” by *that* Admiral Tarkin. And man, “sedition” is a pretty big word for a kid’s cartoon show, which this increasingly seems not to be…

Anakin and Plo Koon are assigned to track Ahsoka down and bring her back to the Jedi Temple, both very logical choices. Ahsoka is Anakin’s padawan, of course, but Plo is the Jedi who found a young, Force-sensitive toddler Ahsoka all those years ago and brought her to the Jedi Temple to become a Jedi. So they have a long-standing bond as well.

Now, if you thought things weren’t complicated enough, Asajj Ventress decides to work her way into this whole business. Barriss Offee passes on a clue to Ahsoka that doesn’t quite work out as intended – or does it? And the episode also plays around on levels above and below 1313, the infamous level that was supposed to appear in a previously partially developed Star Wars story project. We’ll talk about all of this and more on the show today. Punch it!