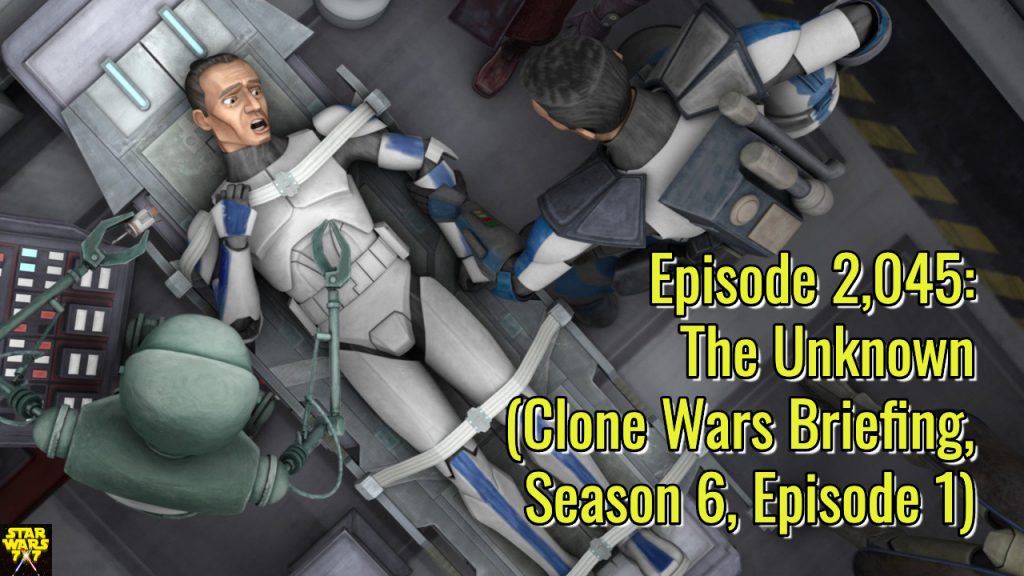 Now we move into the Lost Missions! That’s how Lucasfilm referred to season 6 of the Clone Wars. It was originally intended to be a 22-episode season, but then it was pulled from the Cartoon Network lineup as of the end of season 5, in March 2013. But – good news! Production was still ongoing, and they ultimately completed 13 episodes, which were first released in Germany and later via Netflix in the US and Canada in early 2014.

On today’s Clone Wars Briefing, we’ll examine “The Unknown,” episode 1 and the first of a four-part story arc. It’s a story that, if you’ve already seen Revenge of the Sith, might fill you with a certain kind of dread. A clone named Tup has a mental breakdown and shoots a Jedi dead at point-blank range. When Count Dooku hears about it, he realizes that one of the big plans he has with Darth Sidious is in danger of being discovered. (Today I learned: Count Dooku knew about Order 66. I knew he knew about the creation of the clone army, but I didn’t know he knew that particular secret about it.)

Thus begins a cat-and-mouse game for possession of Tup, which we’ll talk about in today’s episode, as well as the stunning visuals, and also a bit of Star Wars news I never got to in yesterday’s roundup episode. Punch it!