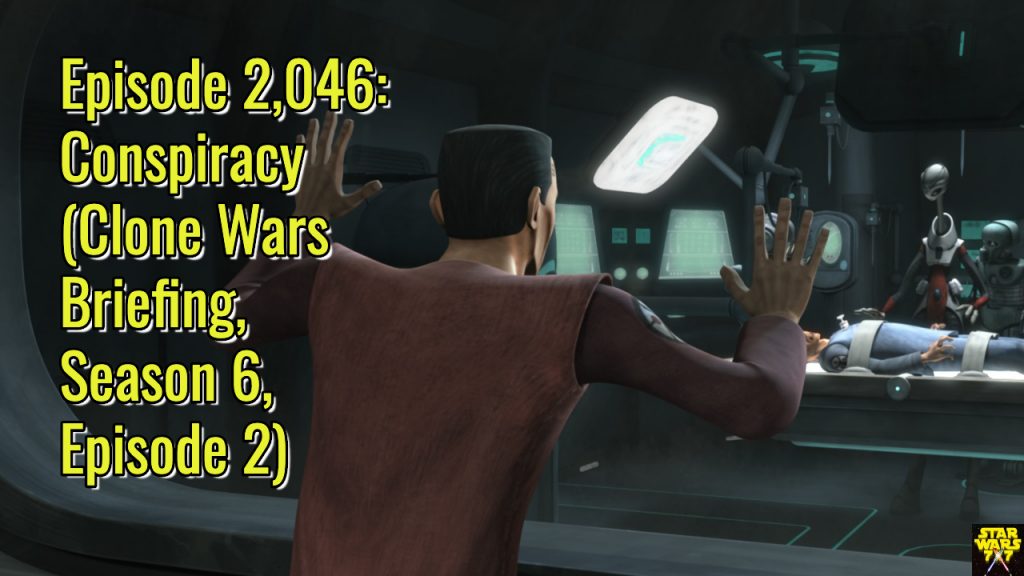 “Conspiracy” is the second episode from season 6 of the Clone Wars, and the second of a four-episode arc. Instead of being a sort of fog-of-war episode with lots of action like the last one, this episode is more of a medical investigation drama. That in itself is remarkable – it goes to show how flexible the Star Wars storytelling universe can be, and it also goes to show how unusual this is for a supposed kids cartoon. This really seems more like young adult storytelling and above.

Also, the sense of dread that you may have started to feel about the situation in the previous episode is only going to get worse in this one. Rex and Fives accompany Tup to Kamino, but while Rex is sent back to fight, Fives is kept in quarantine, in case he has the same problem that Tup does. (Why they didn’t keep Rex also, since he was exposed, doesn’t make sense to me.)

Tup and Fives both come up negative for any virus, and a debate over Tup’s fate develops between Jedi General Shaak Ti, who wants Tup to undergo an atomic brain scan, and the Kaminoans, who want to “terminate” Tup and investigate after the fact. But we find out that the reason why the Kaminoans don’t want Tup to undergo an atomic brain scan is because of what it will reveal…

We’ll talk about that today, and about a change to the model of how these seasons are released. Punch it!