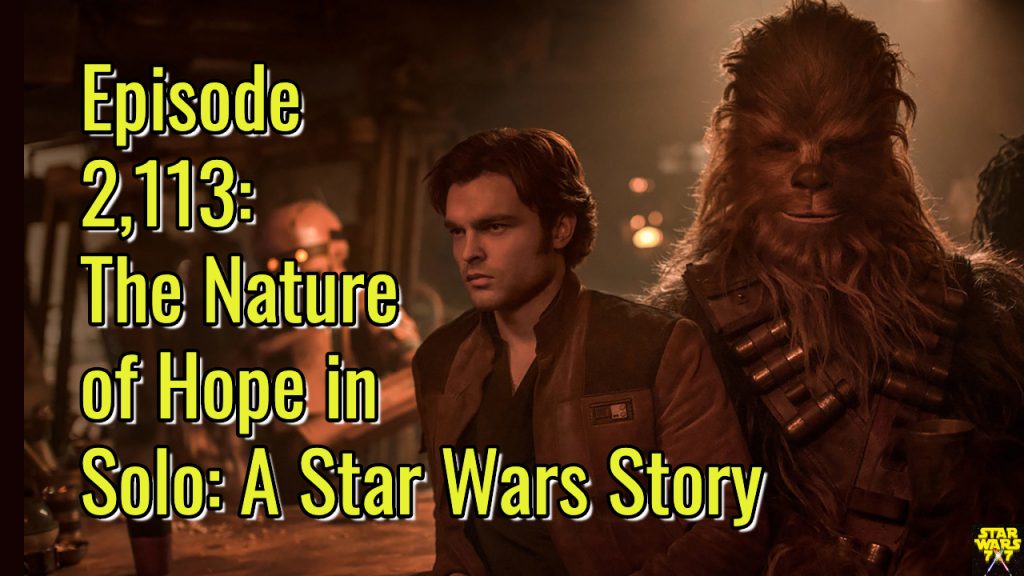 In doing my research for these “Hyperspacing Hope” episodes, Solo: A Star Wars Story caught me off guard. Of all the movies I’ve examined so far, Solo is the one in which I got most caught up. I barely stopped the movie at all to take notes, and the notes I took were the least of any of the movies we’ve discussed to date. I kept getting sucked into the movie and forgetting what I was there for!

And there’s a lot of hope to be discussed in the movie – although it doesn’t go by that name, if it’s even named at all. Instead, when these scoundrels talk about “luck,” they’re really talking about hope. When Lando says, “I’m a lucky guy,” he’s talking about an ingrained sense of hopefulness. And when Han pulls out a rock and pretends it’s a thermal detonator, or when he convinces Chewbacca that his “very good friends” are in that AT-hauler, the force of his belief – his hope – is so strong that you could make a case for Han as the most hopeful major character in the franchise.

Today, we’ll talk more about luck and hope, how being lucky or unlucky overlays the spectrum of hopefulness, how this movie made me want to re-watch the Original Trilogy and The Force Awakens in a new light (because these ones have Han and/or Lando in them), and much more. Punch it!