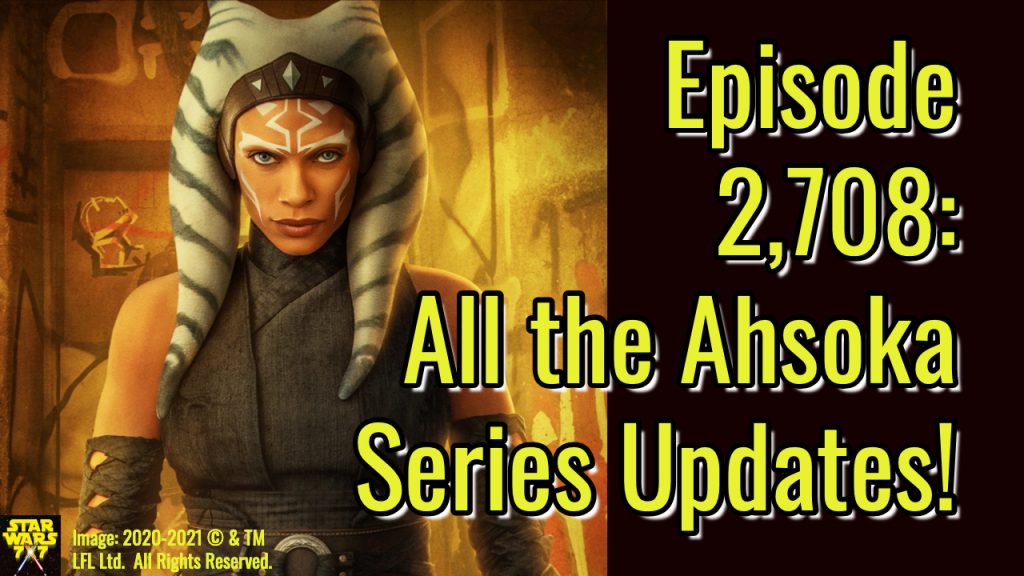 Casting rumors and magazine features, oh my! Let’s pick up on the thread we pulled Monday and catch up on all the Star Wars: Ahsoka series news. Punch it!

Star Wars 7×7, episode 2708. I’ve been looking for a spot to work in an update on the Ahsoka series. And every time I think I’ve got a spot, something new happens, and I’ve got to rearrange, et cetera, et cetera. So now we’ve got a host of updates! It’s about the Ahsoka series that have happened over the past couple of weeks, and we’re going to cover all of the details here today. Punch it!

Hey, Rebel Rouser, I’m Allen Voivod. This is Star Wars 7×7, your daily dose of Star Wars joy. And thank you so much for joining me for it. So we were just talking about the Ahsoka series the other day when we did the episode on highlights from the Empire Magazine big feature story with the Book of Boba Fett, because there was a second article in there specifically about the Disney+ streaming series that are being developed. And they interviewed Kathleen Kennedy for this.

She talked about how exciting 2022 is looking with the continuation of the Book of Boba Fett and then the Kenobi series and the Andor series and Mandalorian season three, and Ahsoka. Ahsoka was mentioned in that whole 2022 set, and we talked about it the other day, about how that would be unusual to consider the possibility that Ahsoka would actually debut in ’22. It didn’t seem like that’s really a likely possibility. So it turns out that some additional context is available for us to consider in this regard.

One of the recent Ahsoka news stories had a bit of an aside that said it’s scheduled to begin production in March, according to a trade magazine, Production Weekly. So if that’s the case, then you could compare it to, say, the Obi-Wan Kenobi series, for example, which began filming in May of this year and was done in September. So it took June, July, August, September, about four months to film. And there’s supposed to be six episodes of the Kenobi series. With the Ahsoka series, if it really is going to start filming sometime in March of 2022, obviously we don’t know how many episodes the series is, but let’s just say it’s six for the heck of it.

That means that it could take just as long, which means it would be done in April, May, June, July, and with the postproduction time, it would probably be done right around the end of the year and could potentially be the series that debuts at the end of 2022 instead of Mandalorian season three. But I kind of doubt it. I feel like they’re probably going to put Mando season three ahead of it. That seems to make more logical sense. So that’s what I’ve got on the timing of things for you.

Circling back to that Empire Magazine secondary piece, there are interview quotes from Dave Filoni, who’s writing the series, and he says, “It’s thrilling. I’ve got to tell you, it’s something you imagine doing for a long time. And then it’s kind of startling when you’re sitting there and now you have to do it.” And he goes on to say, “I thought of this adventure for Ahsoka for a long time, and it’s interesting to see how it’s evolved from years ago. I never would have imagined that it would spring from a branch of a tree that had anything to do with a guy like Din Djarin or a child that looks like Yoda. It’s a great lesson for me on how when you have other creatives like Jon Favreau, they can help lend such dimension and depth to what you’re doing.”

Now you hear him say something like I’ve thought of this adventure for Ahsoka for a long time, it’s impossible not to think of the ending of Star Wars Rebels when Ahsoka comes back to Lothal for Sabine Wren and says, hey, let’s go find Ezra. We were all thinking that anyway, from the moment that Ahsoka asked the Magistrate where Grand Admiral Thrawn was at the end of Chapter 13 of The Mandalorian.

Now, the other day when we talked about where Rogue Squadron is in its processes and compared it to where The Force Awakens was at this time of the process, it occurred to me that the script was still being written in December 2013, but that they had already done open casting for the roles of Rey and Finn, so they knew that those characters existed and probably had a decent hold on them. And so at that point, even with Larry Kasdan and JJ Abrams rewriting the script, it just meant that the characters were perhaps going through different situations.

But the fundamental nature of the characters wasn’t necessarily changing. So that meant that even though the script was being written and being rewritten, they could still cast for the characters. And so when you think about the casting rumors that have dropped over the last couple of weeks, the fact that Dave Filoni is still writing doesn’t necessarily mean that they can’t be casting already. If they know the major players in the series and they’re kind of known quantities character-wise, then casting them is actually a perfectly feasible thing to be doing right now.

So that’s how we get to the news breaking of Natasha Liu Bordizzo, who has reportedly been cast in the role of Sabine Wren for this series.

Nobody has officially commented on this. Deadline Hollywood seems to be the one moving on Ahsoka news better than any of the other Hollywood trades, actually. And also, bizarrely about this, The Hollywood Reporter has been completely silent on anything related to the Ahsoka series. So Deadline broke the news about Natasha and then Variety followed up and confirmed with their own sources, but nothing from The Hollywood Reporter whatsoever.

And not long after that, we get the news, or the rumor to be more precise, of somebody else being cast for the Ahsoka series, Ivanna Sakhno in an unspecified role. And funnily enough, Ivanna has a Star Wars connection. She was in Pacific Rim: Uprising with John Boyega. What do you know?

Of course, this casting rumor has not been confirmed by anyone whatsoever. Deadline again broke this one and Variety went to their own sources and confirmed it. And once again, The Hollywood Reporter, nothing, not a peep. The whole unspecified role business has people theorizing like crazy about this.

So let me put a little bit of context on it, and it’s almost a bit of a water-dousing, to be honest with you, but it’s okay. It’s still kind of interesting. I think so. Back when Mando season two was still in production, Timothy Olyphant’s name popped up in the rumor mill.

He’d been cast in an unspecified role, and it turned out that he only appeared in one episode of the show. Hey, he got an Emmy nod for that appearance, so that’s very cool. But it was a guest appearance, at least according to the Emmy nomenclature. Anyway, the point is, the rumor about Ivanna appearing in the Ahsoka series doesn’t necessarily mean that she has a significant role in the series. It might be that she only has a one-episode role in the series, but it could also be significant, too.

I’m not saying that it isn’t. I’m just saying that history has shown us that when these rumors break, it doesn’t necessarily indicate that it’s somebody that’s significant to the series yet, so we can’t necessarily go jump into conclusions. Although I have to say, I really do like the suggestion that Admiral Ar’alani, who is one of Thrawn’s compatriots in the Chiss Ascendancy, that character could be represented here. Yeah, that is kind of fun to think about.

And on the off chance that something would have happened with the whole Bring Home the Bounty thing this week, I did double check too, because between that and news breaking in the trades and across Twitter and whatnot, I’m like, I gotta double check everything before I bring this episode to you. And so far as of the recording of this episode, which is late Wednesday evening, no more. So good news, that catches you up on everything!

And so that is going to do it for this episode of the show. It just remains for me to say thank you so much for joining me for it, as always. And may the Force be with you, wherever in the world you may be.