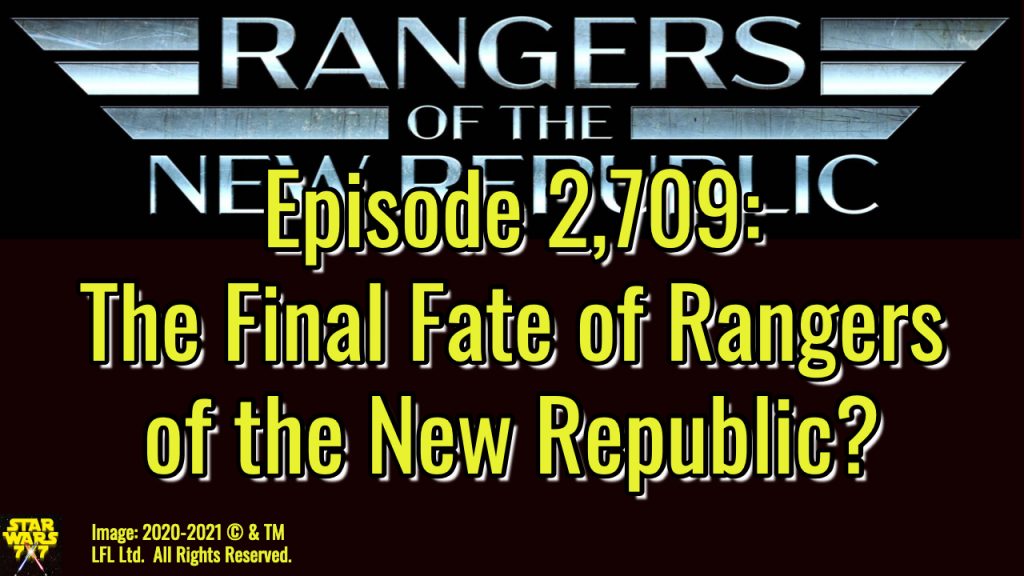 Also in Empire Magazine, we find out how far along Rangers of the New Republic got in development (not very). We’ll put that into context on today’s show, and also consider this question: did Pablo Hidalgo sneak the premise of the series into an in-universe reference book back in 2018? Punch it!

Star Wars 7×7, episode 2709. One last thing about the Empire Magazine cover story on the Book of Boba Fett. Remember, we mentioned that there was a secondary story in there in which Kathleen Kennedy and others were interviewed about other Disney+ series in the works? Well, Rangers of the New Republic came up in that conversation, and it seems like we now know the final fate of that series. Punch it!

Hey, Rebel Rouser, I’m Allen Voivod. This is Star Wars 7×7, your daily dose of Star Wars joy. And thank you so much for joining me for it. So funnily enough, I think Pablo Hidalgo from the Lucasfilm Story Group actually seeded something about Rangers of the New Republic in a book that came out in 2018. And I’ll explain about all of that and my suspicions in that regard. But first, let me explain the Empire Magazine situation.

They named check Rangers of the New Republic and mention the stuff that went on with Gina Carano. But what they got out of Kathleen Kennedy was very specific and also surprising in a way. What [Kennedy] said was that they had never developed any scripts or anything like that. And she says she thinks that some of the ideas are going to be integrated into, say, the Mandalorian. So that sounds like we’re not going to see a Rangers of the New Republic series, maybe ever, maybe ever.

Right now, its status is still “not currently in development,” but it doesn’t sound like there’s any motivation to get it back into development in some other format. And we can add a little bit of context to this as well by comparing it to other Disney+ series that are definitely moving forward in development. Rangers was announced, if you’ll recall, at the Disney Investor Day just about a year ago last year, December of 2020. And at that time they also talked about the Andor series which had just started filming. They talked about the Kenobi series, which was going to start filming, and we didn’t even know yet about the Book of Boba Fett at that time.

But The Book of Boba Fett started filming, got finished, and it’s coming out this month. Kenobi has finished filming and is ready to come out probably late winter, early spring of ’22. The Andor series, we’ll see that next year as well. And then the Ahsoka series, which was also announced at the Investor Day this time last year, is now being scripted by Dave Filoni. So that will give you an idea of the forward motion happening on so many other Star Wars series. When it comes to Rangers of the New Republic, it seems like even before everything went down with Gina Carano, that series was not necessarily in the hopper.

In other words. Andor and Kenobi and Ahsoka were already prioritized above Rangers of the New Republic, and same with the Book of Boba Fett as well. It doesn’t sound like they even had a showrunner or a head writer picked out for the series yet in December of 2020. I mean, they announced Justin Simien for the Lando series and Leslye Headland for The Acolyte series already. So yeah, it seems like Rangers was something that was going to be kind of far-ish down the line anyway.

And for the record, they never even told us what this show was going to be about anyway. All they said at the time last year was that it would be executive produced by Dave Filoni and Jon Favreau and that it would intersect with other stories and culminate in a climactic story event. So that’s it, and that it would take place in the time of the Mandalorian. So yeah, it doesn’t really tell us much at all. But as I mentioned near the beginning of the show, it seems as though Pablo Hidalgo has done some seed work, some Easter egg work for what could be the Rangers of the New Republic or what could have been the Rangers of the New Republic.

I keep an eye on Pablo for things like this because way back when in Celebration Orlando in 2017, he was on a panel and talked about how with the Rogue One guide that he did for DK Publishing, he put a mention of the planet Crait in there, and it was purposeful and snuck in because he knew that the planet Crait was going to be in The Last Jedi, and so he thought, oh, I can kind of sneak something like that in. And it’ll be a cool Easter egg when it turns out that Crait is in a movie that comes out a year later, he does that sort of thing.

Okay, so I was checking out stuff related to the series that we did on the different criminal syndicates and which ones might appear in The Book of Boba Fett. And as part of that, I kept coming across references to a book that Pablo had written in 2018 called Scum and Villainy, with a subtitle of Case Files of the Galaxy’s Most Notorious. It’s an in-universe reference book that’s published by Epic Ink. And it’s told from the perspective of a person in a long line generationally of law enforcement officers.

The book is divided into three sections. The first part is called The Last Days of the Republic, as in prequel trilogy era. The second part is The Time of the Empire, that’s, of course, original trilogy era, and the third part, The Challenges of the New Republic, does get close to sequel era stuff, but it’s really more about the period after the events of Return of the Jedi. Now I hope you’ll indulge me two paragraphs from the opening of that section, The Challenges of the New Republic, because I think it reveals what the premise of Rangers of the New Republic might have been. But I also think it reflects on the world of the Mandalorian, as it was sort of very briefly and elliptically described in the original episode of the series.

Here we go. It says [paraphrased] “Crime is the most resilient of parasites, and found a way to thrive under the jackbooted heels of the Empire. In today’s more relaxed climate, it was allowed to spread. Criminals pursued by local authorities could disappear into a more lenient system. With a simple hyperspace jump, whole sector governments became subject to corruption. Mobsters became oligarchs, absorbing abandoned pieces of Imperial infrastructure with surprising ease.”

I mean, that does kind of sound like the frontier like situation that we find in the world of the Mandalorian, doesn’t it?

All right. Here’s the second paragraph. [paraphrased] “The New Republic Senate tried to emphasize the freedoms that had returned to the public after the fall of the Empire, but opponents to the new system were right to call out its shortcomings. The pendulum had swung too far. It took years to find an equilibrium, which came in the form of the Sector Rangers, coordinated law enforcement that spanned borders and shared information. But by the time the Rangers were instituted, new criminal organizations, which evolved from the Hutt Cartels, the Crymorah Syndicate, and Crimson Dawn, had become more powerful. The New Republic was but a fraction of the size of the Galactic Empire and even the Old Republic that preceded it. Its blunted authority can only reach so far.”

I mean, come on. That’s the whole game right there. Right? “Sector Rangers” and new criminal organizations evolving from the Hutt Cartels and the Crymorah and Crimson Dawn. And by the way, this book came out in 2018 and Solo came out in 2018, which really got into Crimson Dawn. I’m sure that’s not a coincidence…

But I’d love to hear your thoughts about that. If you think that we’re going to see Sector Rangers in The Book of Boba Fett, I’d love to hear you say it. And if you think I’m crazy and that’s not going to happen, I’d like to hear you say that, too. Chime in wherever there’s a comment section where you’re catching this episode or at home base for the show at SW7x7.com. And that right there is going to do it for this episode of the show.

It just remains for me to say thank you so much for joining me for it as always. And may the Force be with you, wherever in the world you may be.