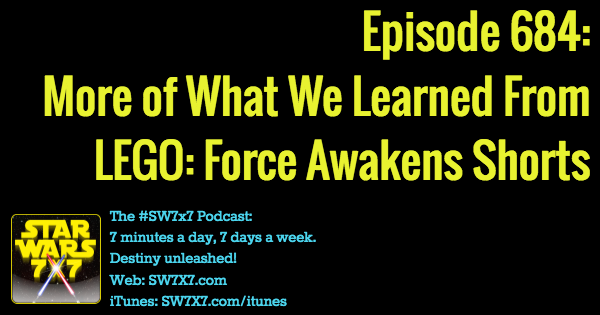 As with yesterday, we’re talking about the LEGO Star Wars: The Force Awakens shorts, and we’ve got two more to cover today: “Hunting for Han” and “The Trouble With Rathtars.” Here are all five of the shorts for your viewing pleasure:

They’re taking these pretty seriously (while having fun, of course) – they have Tom Kane doing the initial voiceovers, and you know him from the narration of Star Wars: The Clone Wars. The content of the rathtar short doesn’t tell us much, but I think it’s safe to infer from the “Hunting for Han” short a few important things:

1. Maz Kanata and Bala-Tik know each other.

2. Maz may know, or at least be aware of, Tasu Leech as well.

3. Maz also knows Lando Calrissian (seems like he’d travel in a circle that would bring him across her path from time to time).

4. Most importantly, Lando is most likely alive in the timespace of the Sequel Trilogy. Spoiler alert for Star Wars: Bloodline coming below…

Okay, if you haven’t read Bloodline, we know Lando is alive as of six years before the events of The Force Awakens, because he sends Leia a note of support after the Darth Vader revelations. It’s almost impossible to think that Lucasfilm would have Lando be alive six years before TFA, only to have him die sometime in those six years before TFA. And if he was dead, then they wouldn’t let him appear in this LEGO video. So I think “alive” is a safe conclusion.

What did you think about the LEGO shorts? And how much do you think they might affect the real Star Wars canon? Have your say in the comments!

Today’s question: What artifact does Kylo Ren own, and sometimes talk to?