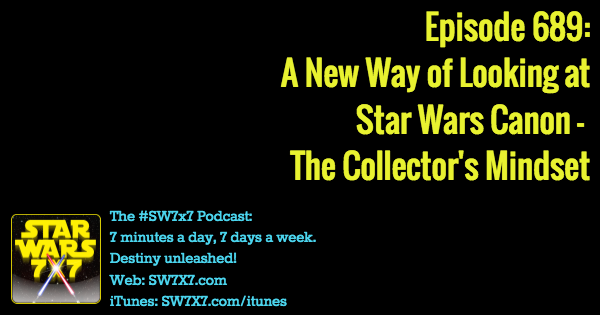 I’ve been thinking about the Star Wars “canon” thing for a while, and the conclusion I’ve come to is one I’ve not seen espoused elsewhere. I believe the deep reason people care so much about what is and isn’t canon, about the rebooting of the Star Wars story galaxy, and the de-canonization of EU material, is that a significant segment of Star Wars fandom exists to collect stories.

The idea of collecting Star Wars isn’t new. Until now, however, it’s been linked to the tangible. Action figures, props, autographs, memorabilia, that sort of thing. Sure, the people who loved the EU have reason to be upset. They spent a lot of money and a lot of time on the EU. It’s an investment, in a way. And to suddenly be told that your investment is worthless? That’s a very tough thing to hear and accept.

Imagine if you had one of the rarest and most valuable action figures, and then Lucasfilm announced they’d found millions more of them in a deal letter office someplace. Now your rare action figure investment isn’t so valuable, right? Same idea with collecting stories and knowledge about the Star Wars universe.

Pablo Hidalgo gets it, in a very real and sympathetic way. He just went on a Twitter storytelling spree about why he thought the rebooting of the EU was a good idea, even though he was initially resistant to it. (Props to Bobby Roberts, formerly of Full of Sith, for pulling all those tweets into Storify for easy one-stop reading.)

And this link on Wookieepedia has information about that story, and it being retconned out of the Star Wars universe.

The podcast has more of the details of my rationale on the subject, but the gist is this: The people to whom the EU/Canon discussion matters most are collectors at heart. They are collecting the stories and knowledge of the Star Wars universe for themselves (or specific corners within it), and they want to know that their investments are valuable – that the knowledge they gather will stand the test of time.

What do YOU think? If you care about canon, have you ever thought about it in terms of collecting? Have your say in the comments!

Today’s question: Who was first seen handling the explosives that were used on the thermal oscillator at Starkiller Base?