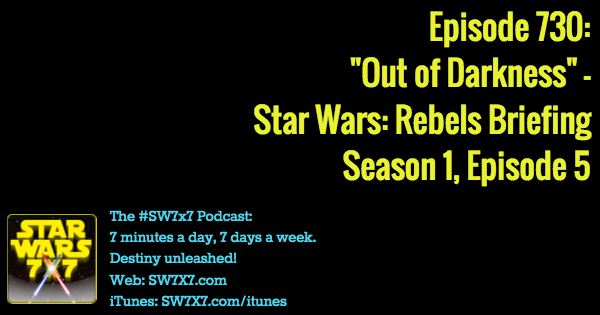 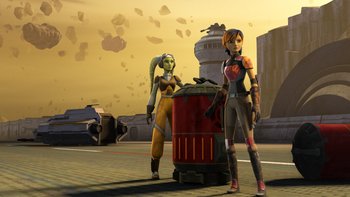 We’re back with a Rebels Briefing today! This time, it’s all about “Out of Darkness,” episode 5 of season 1 of Star Wars Rebels.

The episode in a nutshell: An informant known as “Fulcrum” directs the Ghost crew to a place to pick up supplies. But because Ezra, Zeb, and Chopper were messing around, they didn’t fix a fuel leak that strands Hera and Sabine at the pickup point, and nearly get them killed by dark-loving creatures called fymocks.

Meanwhile, Sabine gets a little testy about being kept in the dark about Fulcrum, and that causes a bit of a trust issue for her. And honestly, if it weren’t for the conceptual introduction of Fulcrum, this would otherwise be an unremarkable episode. It does, however, set up a confrontation that happens in episode 7 of the series, which we’ll be covering three weeks from now (episode 6 next week, Celebration Europe the week after that, and then back to the regular Briefing schedule).

Yesterday’s answer: From the Rebel Alliance

Today’s question: What does Finn leave behind him as he walks through the desert of Jakku?