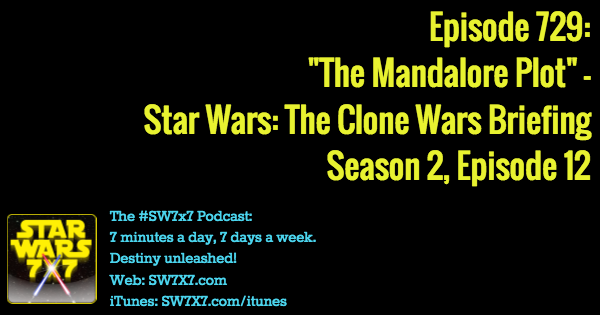 Welcome to a new Clone Wars Briefing! This time we’re covering “The Mandalore Plot,” which is Episode 12 of Season 2 of the Clone Wars series. (Get the full episode rundown on it at Wookieepedia, where the image comes from as well.)

The big news to consider about this episode is that it seems the pictured Duchess Satine of Mandalore has some kind of history with Obi-Wan Kenobi, and maybe the history is a little more exciting than you might expect of a Jedi. Yeah, I know, Anakin’s lady history is also exciting, but he’s supposed to be the exception to the rule, as far as we know.

The episode in a nutshell – there’s a thing called “Death Watch” on Mandalore that Satine and company thinks is just a bunch of hooligans and vandals, but it turns out that on Concordia (a moon of Mandalore), a bunch of new Mandalorian Warriors are being trained and led by the governor of Concordia, Pre Vizsla, as a fighting force allied with the Separtists.

Satine is leading the “New Mandalorians” and a Council of Neutral Systems, and doesn’t want to get involved in the war, so she ends the episode by leaving for Coruscant to tell the Republic Senate not to intervene with her trying to handle the Death Watch. And knowing that the next episode is called “Voyage of Temptation” suggests that there are going to be some major fireworks on the horizon…

Yesterday’s answer: Pulled up from underneath

Today’s question: From where did the Resistance get its emblem?