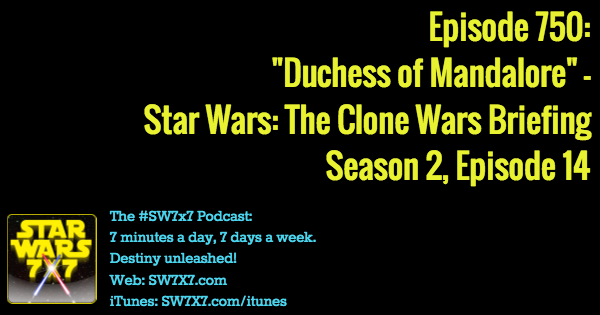 Here we go with another Clone Wars Briefing! This time we’re looking at “Duchess of Mandalore,” the 14th episode of season 2 and the final part of a three-episode arc involving Duchess Satine, the unrequited love of Obi-Wan Kenobi.

In brief (pun intended): The Duchess goes to tell the Galactic Senate not to intervene on Mandalore, but of course Palpatine wants it to happen, pitching it as necessary to protect them from Death Watch. Secretly, he knows Dooku has been working with Death Watch, and like Satine, knows that if the Republic comes to occupy Mandalore, Death Watch will be treated as heroes, not terrorists, by the people of Mandalore.

A recording from Mandalore’s Deputy Minister Jerec is played, but he advocates for Republic aid, which is unexpected. Satine has to find a Mandalorian mole from the republic Ministry of Intelligence, who give her the full recording of Jerec’s statement, which was originally against Republic involvement, but had been faked to appear otherwise. A Death Watch assassin kills the contact, but can’t get the job done with Satine despite numerous attempts. Satine calls Obi-Wan for assistance and protection, and together, they get the full recording to the Senate, which kills the occupation vote, leaving Death Watch hung out to dry by Dooku and the Separatists.

So Death Watch looks like it could still be a force with which to be reckoned, to some degree, but not enough by itself to take over Mandalore. Not yet, at least. For me, this story arc was my first introduction to deeper Mandalorian stuff, but nothing compares to the bombshell of the second episode in the arc, where Obi-Wan says he would have left the Jedi Order of Satine had asked him to.

Looking past the fact that it’s a chump move to put that on her, it’s illustrative for the relationship between Anakin and Obi-Wan. Anakin gets to see what he could have looked like or grown up to be if he had followed the Jedi code and not hooked up with Padme, and it’s not the prettiest of pictures. Obi-Wan talks honestly, if briefly for TV purposes, about the long-standing regret he carries over Satine. This, of course, is more justification for Anakin to follow the path that he’s on with Padme.

What did you think about this arc? Have your say in the comments!

Today’s question: How many different colors of pauldrons do we see on stormtroopers in The Force Awakens?