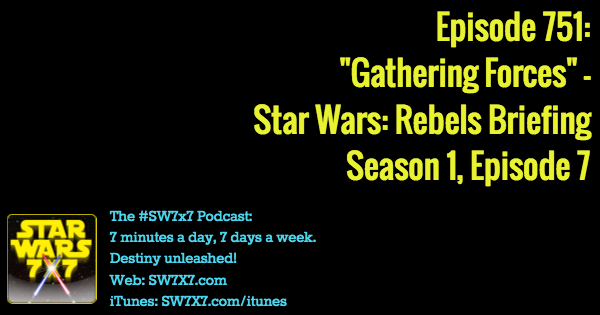 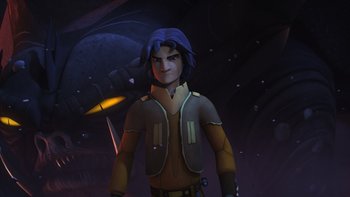 Welcome to a Rebels Briefing! This is just about the halfway point of Season 1, considering the “movie” premiere and 15 episodes total. We’re on episode seven, “Gathering Forces,” which picks up directly from where the previous episode, “Empire Day,” left off. (Click here for the extended episode rundown, via Wookieepedia.)

In brief: The Ghost crew makes it into hyperspace with Tseebo (a Rodian from the Imperial Information Office on Lothal with cybernetic implants, who had secrets that could “bring down the Empire,” according to Kanan). However, the Inquisitor is tracking them. Luckily, the tracker is attached to their auxiliary ship, the Phantom. In a fulfillment of one of the coolest “What if?” questions out there, Kanan and Ezra get in the Phantom and cut loose from the Ghost while in hyperspace, getting kicked out of the stream and eventually making their way to asteroid base PM-1203, which we just saw in episode 5, “Out of Darkness.”

There, Kanan pushes Ezra to confront his feelings about his parents and Tseebo’s role in their disappearance, which allows Ezra to use the Force-bond with the aggressive fyrnocks there. The two send the fyrnocks to fight the Inquisitor and his stormtroopers, but it takes Ezra tapping into the Dark Side to get Big Mamma Fyrnock into the battle to take out the Inquisitor long enough for Ezra and Kanan to escape.

The Ghost crew is able to deliver Tseebo to the Rebels, and all’s well that ends well, for now. We get the impression that Tseebo shared the fate of Ezra’s parents with Hera, but it’s not really clear at this point whether he actually did…

Today’s question: Who triggers the explosive charges inside the thermal oscillator on Starkiller Base?