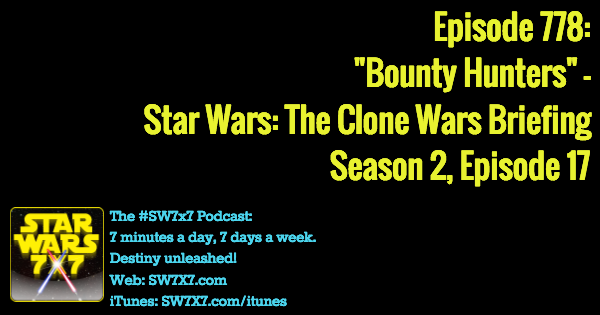 It’s time for another Clone Wars Briefing! This time, we’re checking out “Bounty Hunters,” which is Season 2, Episode 17 of the Clone Wars cartoon series. (Here’s the full episode rundown, with image via Wookieepedia.)

From the top, the creators note this is a tribute to Akira Kurosawa, the legendary Japanese filmmaker. He’s best known in the Star Wars universe, perhaps, for inspiring George Lucas and the original Star Wars with his movie The Hidden Fortress. In this Clone Wars episode, however, they’re paying tribute to The Seven Samurai (aka The Magnificent Seven as westernized a few decades ago).

Ahsoka, Ani, and Obi are shot down while investigating the disappearance of a medical station over Felucia. After crash-landing, they discover a farm being terrorized by pirates and protected by bounty hunters. Turns out the pirates are led by Hondo Ohnaka, who once got the better of Ani, Obi, and Count Dooku all at once.

The bounty hunters and the Jedi help train the farmers to fight, and they’re able to fend off enough of the pirates to make Hondo rethink his attacks, and leave the planet. It’s sort of a dark mirror to one of the previous season’s episodes, where a pacifist species won’t defend themselves from the Trade Federation – or even allow themselves to be defended by the Jedi. Then, it took people rebelling against the pacifist leader to save the species. This time, the people take up arms themselves and save their farms.

It’s a palate-cleansing episode, in a way, to allow a little more character development, to explore a little more in between checking out the larger war. What do you think? Do you like episodes like these, or do you want to stay fully engaged in the tide of the Clone Wars? Have your say in the comments!

Today’s question: How many lightsaber blows does Finn land on Kylo Ren?