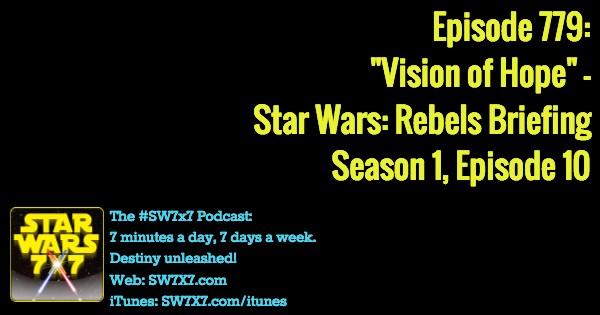 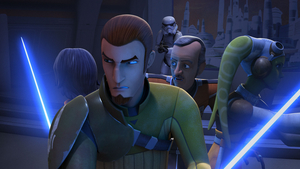 Welcome to another Star Wars Rebels Briefing! This time, we’re looking at “Vision of Hope,” episode 10 from the first season. (Here’s the full episode rundown; pic via Wookieepedia.)

So, this Senator Gall Trayvis guy, he’s respected for appearing to stand up to the Empire in the Galactic Senate, and he’s had secret transmissions embedded in the Imperial Holonet for rebels to see. This time, he claims to be heading to Lothal, where he hopes to meet up with rebels there, and gives clues to a location.

The Ghost crew, thinking the Empire could figure out the clues as well, proceeds as though there will be a trap. And Ezra’s friend Zare Leonis from the Imperial Academy on Lothal (see “Breaking Ranks,” episode 4 from season one) confirms the trap. But it turns out that Trayvis is actually an agent of the Empire. He speaks out against the Empire to get rebels to trust him, but secretly works to catch rebels for the Empire.

Now, I didn’t know Trayvis was a bad guy until this episode, but I’d suspected as much after “Rise of the Old Masters,” the episode in which he claimed that Luminara Unduli was still alive and being held in a secret Imperial prison. It turned out to a trap, surprise surprise. The Imperials were keeping Lumi’s dead body there, and the Jedi they lured would sense something about her being there, but find out to their dismay that it was a ruse to catch and kill them.

The Ghost crew seems to have decided that Trayvis himself had been fed misinformation, and that he was on the up-and-up. Me? Wasn’t buying it. And I was right, which will be the end of my self-back-patting.

Long story short, the Ghost crew escapes, and Ezra is disillusioned about his rebellious fallen idol. But the live to fight another day, in “Call to Action” – the next episode, which features the appearance of another Original Trilogy (and Clone Wars) character – Grand Moff Tarkin.

(P.S. – Trayvis is voiced by Brent Spiner, better known as Commander Data from Star Trek: The Next Generation.)

Today’s question: How many times did Kylo Ren injure Finn with his lightsaber in The Force Awakens?