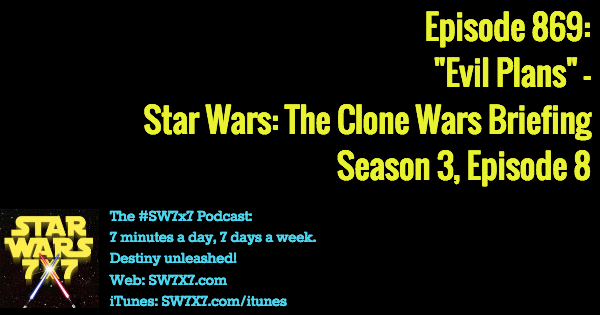 Welcome back for another Clone Wars Briefing! This time I’m digging into “Evil Plans,” episode 8 from season 3 of the Star Wars TV series. (Here’s the full episode rundown on Wookieepedia, from where the images comes as well.)

This episode is a prequel to “Hostage Crisis,” the final episode of season 1 of the Clone Wars series, and maybe it’s just that it even touches Ziro the Hutt that it doesn’t work from me. Ziro only appears as a holographic image, and doesn’t even speak! And yet, it seems to be a sign that I’m not going to be a fan of the episode.

Basically, the behavior of C-3PO and R2-D2 strains my belief from start to finish. Artoo fails on the one job he was given for Padme’s party – to get Jogan fruit for the dessert. I’m sorry, but for all the amazing things Artoo has been asked to do over the years, this is the one thing he blows? Very hard to believe.

So Anakin sends Threepio out to buy the fruit, with a warning to come right back and not get distracted, and sends Artoo to keep an eye on Threepio. Makes sense. So when one of Cad Bane’s accomplice droids tries to get Artoo and Threepio to divert to a droid spa, you’d expect Threepio to get distracted and Artoo to have to keep him on track. In fact, you’d be more likely to expect Threepio to pass because of the importance of party protocol. Which he does.

But outrageously, Artoo decides to check out the spa. Sure, he’s got a rebellious streak in him, but if you give him a job, he does the job! Again, not really buying it. Of course, while Artoo is heading to the spa without looking back at Threepio – whom he’s supposed to be keeping an eye on – another droid knocks Threepio into a speeder and whisks him off to Cad Bane, Artoo none the wiser.

Threepio doesn’t have the Senate floor plans that Cad Bane needs for the job he pulls in “Hostage Crisis,” but Threepio unhelpfully reveals that Artoo has them. So off go Bane’s accomplice droids to get Artoo.

The one redeeming thing – how great was it to see Artoo get pampered for once? If any droid deserves it, he does! But even then, the fact that it was bad guy robots trying to get Artoo and Threepio in there, and the creepy voice quality of the droid spa droids, kept me waiting for the other shoe to drop – thinking that something bad was going to happen to Artoo in there. It didn’t, thankfully.

Artoo, of course, escapes from Bane’s droids, only surrendering himself when he overhears them talking about tearing Threepio apart. So Bane gets the floor plan he needs, wipes their memories of the day, and dumps them back in front of the droid spa. Luckily, the Jogan fruit container is lying in a corner, so they grab it and get back just in time for the dessert presentation.

Finally, Cad Bane reports back to Jabba and gets paid, but is then hired by the Grand Hutt Council for the next part of the job, to break Ziro out of prison, which will lead into “Hostage Crisis.”

Meanwhile, how dangerous was it that Bane had access to all of the information stored inside Artoo? He could have had a field day with it, and yet he only took the floor plans. Missed opportunity for Bane, what a relief for the rest of us.

So, yeah, really had trouble believing Artoo’s actions in this episode, which basically kept me from buying into the story. How about you? Agree? Disagree? I’d love to hear your thoughts about it!

Today’s question: In what country were some of the exteriors for Starkiller Base filmed?