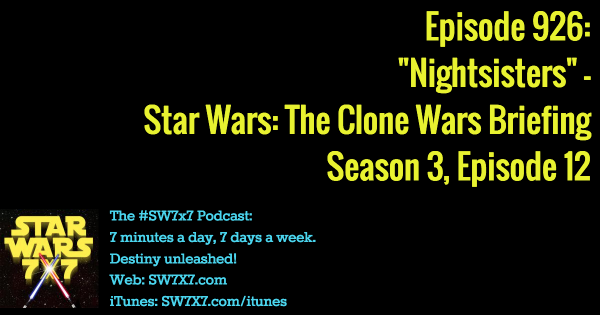 Welcome to another Clone Wars Briefing! We’re back with “Nightsisters,” episode 12 of season three of the Star Wars TV series. (Here’s the full episode rundown on Wookieepedia, from where the image also comes.)

In recent years, Lucasfilm creative executives (especially Dave Filoni, the creator of Clone Wars and Rebels) have talked about expanding our understanding of the Force and its users. We’ve gotten that with Bendu in Rebels, who describers himself as a “middle way” between light and dark. And there are the Guardians of the Whills, including Chirrut Imwe and Baze Malbus, from Rogue One – not Jedi, but certainly connected to and able to work with the Force.

But well before any of those, they gave us Nightsisters, introduced in this episode. They’re dark side users but not Sith. And not only are we introduced to them and their leader Mother Talzen, but we also find out that Ventress is herself a Nightsister, and get Ventress’ backstory in flashback.

The story in brief: Darth Sidious thinks Ventress is getting too strong, and that Dooku like Ventress too much and might be plotting to overthrow Sidious. Though Dooku protests, Sidious isn’t having it, and orders Dooku to kill Ventress.

So he tells Ventress she’s on the outs during a huge battle with the Republic, and though Dooku orders the ship that she’s on destroyed, Ventress survives and gets back to Dathomir, where Talzen and the Nightsisters heal her, then help her try to kill Dooku. They don’t succeed, but Talzen uses the opportunity to get Dooku to say yes to taking on a Nightbrother as a new apprentice.

This is the beginning of a new story arc, and a return to more action-oriented episodes – great lightsaber battles and space battles. And when you add a compelling Nightsisters intro? One of the better episodes I’ve seen in this whole series so far.

Today’s question: What two things does Han ask about, when trying to figure out with Finn and Chewie what to do with Phasma after the shields are down?