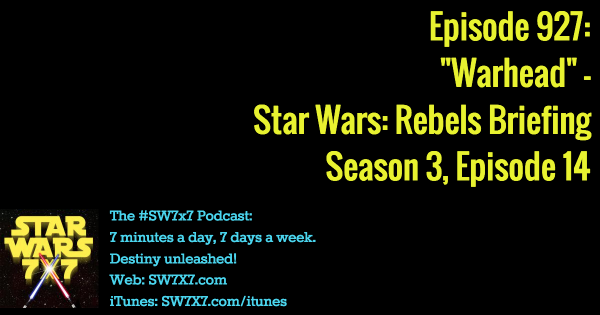 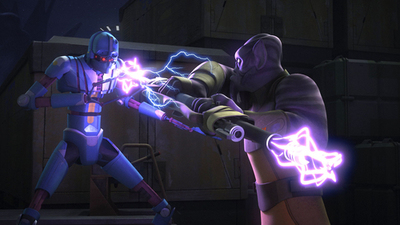 Welcome to our latest Star Wars Rebels Briefing! This time we’re looking at “Warhead,” episode 14 from season 3 of the Star Wars TV series. (Here’s the full episode rundown via Wookieepedia, from where the image also originates.)

Pretty straightforward, as these episodes go – in a concept straight out of The Empire Strikes Back, the Empire launches a bunch of probes with the purpose of finding rebel bases. Inside the probe ships are infiltrator droids, disguised to look like older model protocol droids. One makes it to Atollon, the home of Chopper Base and our esteemed protagonists.

With Kanan, Hera, Ezra, and Sabine away on a training mission, Zeb is in charge, and finds the droid out in the wastelands. Like the trojan horse, Zeb brings it back to the base. Once it’s recharged and remembers it’s an Imperial droid, chaos ensues. Ultimately, they send it back to the Empire with its self-destruct mechanism armed. It destroys an entire Star Destroyer, thus protecting the specific location of the rebel base – for the moment.

It turns out that Grand Admiral Thrawn has only sent out probes to 94 planets overall, so by sabotaging the infiltrator droid and sending it back, the rebels have helped Thrawn narrow his search. Uh-oh…

Yesterday’s answer: A garbage chute and a trash compactor

Today’s question: What’s the one thing Kylo Ren drops during his fateful encounter with Han Solo on Starkiller Base?