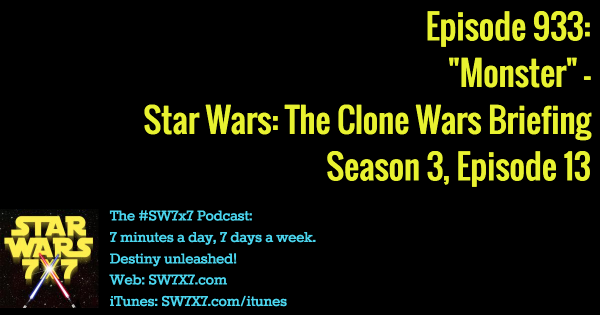 Welcome to our latest Clone Wars Briefing! Today I’m looking at “Monster,” season 3, episode 13 of the Star Wars TV series. (Here’s the full episode rundown on Wookieepedia, from where the image also comes.)

In short, Asajj Ventress gets to pick the Nightbrother (from Darth Maul’s family line!) who will become Count Dooku’s new apprentice. After three trials, she picks the lone survivor, who has to undergo a majick-driven ceremony with Mother Talzen and the others that basically operates like the Steve Rogers/Captain America supersoldier serum. It makes him grow stronger, taller, broader, and pointier.

From there, the apprentice – Savage Opress by name – is delivered to Dooku, who give him his first task – take out the Jedi/Clone contingent protecting a temple on Devaron. You may remember this planet from Weapon of a Jedi, one of three novels for younger readers released in September 2015 as part of the “Journey to The Force Awakens.” In it, Luke Skywalker (between Star Wars and Empire) goes to this same temple on Devaron, hoping to learn some of the Jedi secrets when (as far as he knows) there’s no one left to teach them to him.

Back to our story: Dooku is very pleased with Savage’s work, and thinks that the two of them could knock off Palpatine and take over the galaxy themselves. Which is why that whole “Rule of 2″ was in place. If you’ve got Rule of 3,” then you’ve got one guy trying to conspire with the second guy to kill the third guy.

One postscript: This episode is unusual in that there are hardly any good guys in the episode. Just the one battle toward the end with an otherwise unknown Jedi and apprentice, where you seem them and some Clones in action, too. What did you think of the episode? Have your say in the comments!

Yesterday’s answer: “The garbage will do!”

Today’s question: What does Unkar Plutt yell when he sees the Falcon being flown away from Niima Outpost?