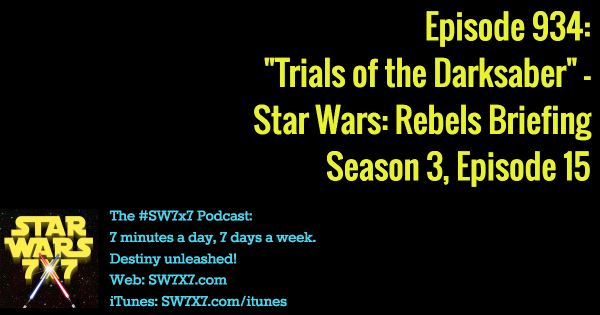 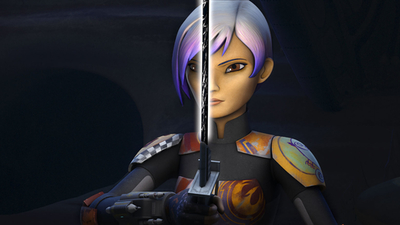 Welcome to the latest Star Wars Rebels Briefing! Today I’m looking at “Trials of the Darksaber,” episode 15 from season 3 of the Star Wars TV series. (Here’s the full episode rundown on Wookieepedia, from where the image also comes.)

Long story shorter: The Rebels and Fenn Rau talk Sabine into taking up the mantle of the ancient Mandalorian lightsaber, the “Darksaber.” It’s got an Excalibur-like quality in that whoever wields it could unite Mandalorians under their rule, and the Rebels could use Mandalorian help against the Empire.

So Sabine, Ezra, and Kanan go out into the middle of nowhere on Atollon so that Sabine can train to use the Darksaber without any distractions. Convorees arrive to watch. Bendu takes notice but doesn’t get involved. Kanan learns that he needs to train Sabine differently. And finally, we learn that Sabine didn’t just leave an Imperial academy. She helped design weapons for the Empire that were turned against the Mandalorians. But when she realized what was happening and spoke out against it, her family turned on her and sided with the Empire.

So Sabine is carrying the guilt about what she feels she did to her people, and anger at her parents for not supporting her. Which is going to make things messy when Sabine returns to Mandalore in a month for the next episode, “Legacy of Mandalore.”

There’s a lot more discussed in the podcast, so please listen and enjoy! And BTW, what did you think of “Trials of the Darksaber”? Have your say in the comments!

Today’s question: What did Rey object to Finn doing while they were running away from stormtroopers on Jakku?