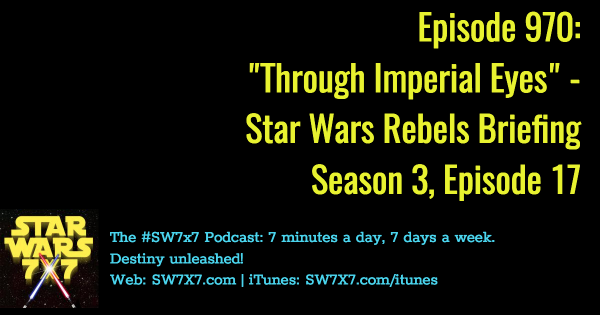 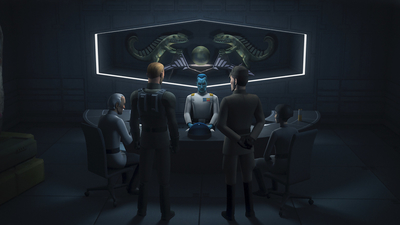 Welcome to another Star Wars Rebels Briefing! Spoilers follow in this blog post and in the podcast itself for “Through Imperial Eyes,” episode 17 of season 3 of Star Wars Rebels. (Here’s the full episode rundown on Wookieepedia, from where the image also comes.)

The action begins with something comparatively unusual for a Star Wars cartoon: a first-person perspective sequence that literally has the viewer looking through Imperial eyes – the eyes of Agent Kallus. And this is going to be a bad day for him…

You know that old saw about how the criminal gets caught because he wanted to get caught? Well, that’s what happens with Ezra Bridger, as part of the plot to extract Agent Kallus before the Empire discovers and kills him. Instead, the plot makes things a lot worse.

Not only is Thrawn actually close to discovering the location of the rebel base on Atollon (aka “Chopper Base”), he manages to skillfully set a trap that catches Agent Kallus and reveals him to be the Fulcrum agent in Thrawn’s midst. But with a little luck for Thrawn, Kallus doesn’t know that his identity has been sussed out. And Thrawn vows to make him more useful to the Empire as Fulcrum than he ever was as an ISB agent.

Meanwhile, Chopper deleted Atollon from Thrawn’s databank and replaced it with a different planet in a different location – but if Thrawn doesn’t see through this one quickly, he’ll eventually find out that his map has been messed with. (I suspect he’s already figured that out, or at least allowed for the possibility.) Which means that if the rebels don’t start evacuating Chopper Base, like, NOW, they’re going to be in for a very rude surprise.

What did you think of “Through Imperial Eyes”? Have your say in the comments!