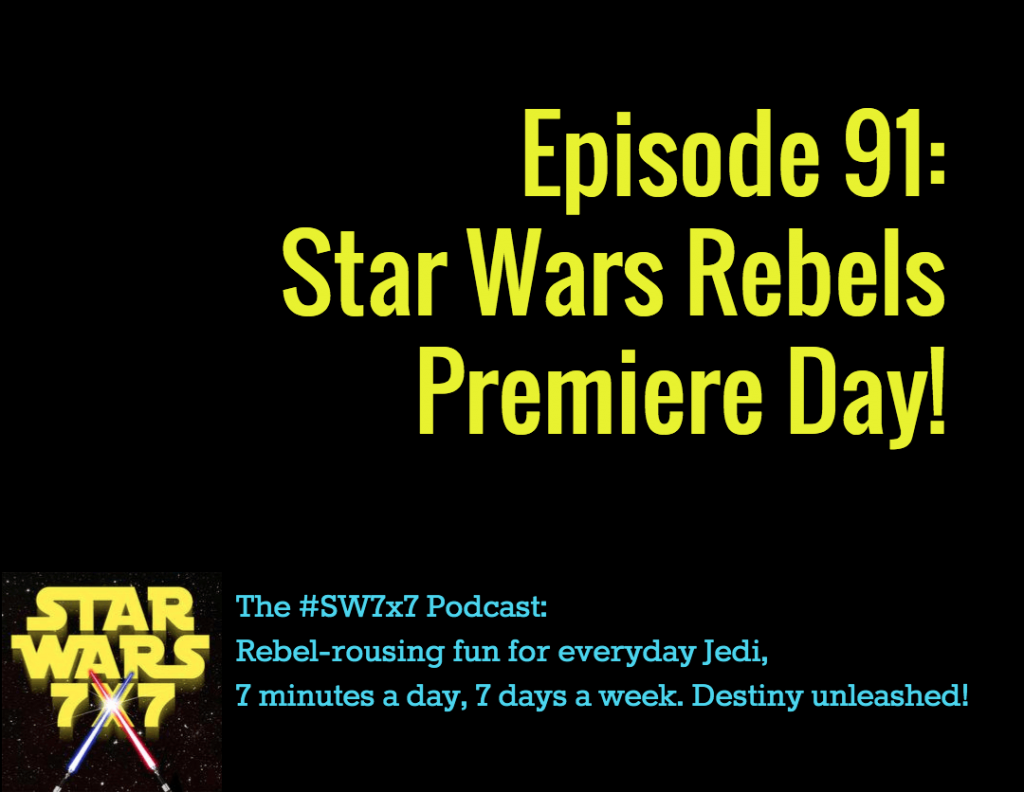 Today’s the big day! Star Wars Rebels debuts on the Disney Channel at 9pm E/P, 8pm C, and would that I were near a major metropolitan city so I could have tried to sneak into one of the advanced screenings of “Spark of Rebellion,” the one-hour episode which kicks off the series.

So I’m probably with a lot of you in that I’ve only seen the short videos and the extended preview, and if there’s an illegal stream of “Spark of Rebellion” anywhere, I haven’t gone out hunting for it.

Speaking of which, there have already been 37 videos posted to the Star Wars YouTube Channel, for more than an hour of total footage, including four 3-minute clips, referred to on Wikipedia as “short films,” which is kinda funny, as well as clips that debuted at San Diego Comic Con, and the 7:41 extended preview, which I could have just played the audio for, and it would have fit perfectly into a 7×7 episode, and I could’ve called it a radio drama! That, I think, would have run afoul of copyright stuff, but I do think that would be fascinating to do – especially since there’s no such thing as a quiet moment in a movie or TV show these days. Once you knew whose voice matched up to which character, you’d probably be able to follow along without the video quite easily.

We have the full playlist embedded below. Can’t see it for some reason? Click here to see it on YouTube! The first 7 videos in the playlist are the ones described above, and the rest feature character profiles, behind-the-scenes interviews, trailers and commercials.

So here’s a rundown of what those of us who haven’t seen it yet already know:

1. Same as the old boss. And I mean this in a nice way, actually! This is the first Star Wars production we’re getting to see since Lucasfilm was bought by Disney, and as you’d imagine, there are fans out there who are leery of Disney’s influence on the final product. Of course, Disney also owns Marvel, and they’ve done a fine job with their movies so far, so why worry? Especially since Clone Wars mastermind Dave Filoni is part of the team at the helm. The Clone Wars only got better as the series wore on, which means I don’t have a bad feeling about this at all.

2. The hunt for the Jedi. Remember when Tarkin said the Jedi were extinct in Star Wars? Well, that may have been true, from a certain point of view. And after Revenge of the Sith, it was kind of difficult to believe that they really killed all of the Jedi. And we’re starting to find out the truth of that on two levels, which Rebels seems to be about to explore. First off, we know that Kanan Jarrus was once a Jedi Youngling who escaped the Order 66 purge. And second, Force-sensitive people are still being born all the time, including Ezra Bridger.

On a side note, since the Jedi had programs in place to identify Force-sensitive kids and bring them into training, I wonder if the Empire will do the same thing, and try to kill those children, or turn them into Sith of one kind or another? It’s been suggested that Rebels will be a darker series than The Clone Wars…just how dark will they get? At the very least, they’re introducing something akin to the Sith Inquisitors from the Expanded Universe with the character known only as The Inquisitor, whom Darth Vader has sent out to hunt any surviving Jedi.

3. The start of the rebellion. The series kicks off at 5 BBY, so Palpatine has been Emperor for 14 years at this point. For those of you doing the math, Luke and Leia will be teenagers at this point, though there’s been no suggestion that either of them will appear in the series…yet. We do know that some familiar faces will be appearing, including C-3PO and R2-D2, and Obi-Wan Kenobi (in hologram form only so far). According to Wookieepedia, Obi-Wan’s voice actor James Arnold Taylor has “teased” the possibility of Ahsoka Tano showing up in Rebels, but there’s been no other suggestion or rumor of it anywhere else. And possibly the most exciting of all, Lando Calrissian. Billy Dee Williams wouldn’t let anyone else voice the character, because as he puts it, “Nobody understands charm the way I do.”

And by the way, it’s official canon that Lando owned the Millennium Falcon before Han Solo, but it’s officially non-canon as of this moment that Lando won the Falcon in a sabaac game on Cloud City in 5 BBY. That said, I’ve got a very good feeling we’re gonna get to see our favorite piece of junk starship in Rebels, too.

So what do you think? Have you seen it yet, are you excited to see it? Join the conversation at Facebook.com/sw7x7!

What incredible timing! Six years ago today, Star Wars: The Clone Wars debuted, with “Ambush” and “Rising Malevolence” played in a double feature that attracted 3 million viewers, making it the most watched series premiere ever on Cartoon Network.

Vader’s Dark Side Roast Coffee – click the pic for details!

Today’s question: Who gets struck down in a hallway of the first Death Star? Bonus: Vader does something that, considering his Jedi upbringing, he probably wouldn’t have done if Lucas had made the prequel trilogy first. What did he do?

Previous Post: 90: How Star Wars Neither Saved Nor Ruined Sci-Fi
Next Post: 92: The Gravity of Count Dooku