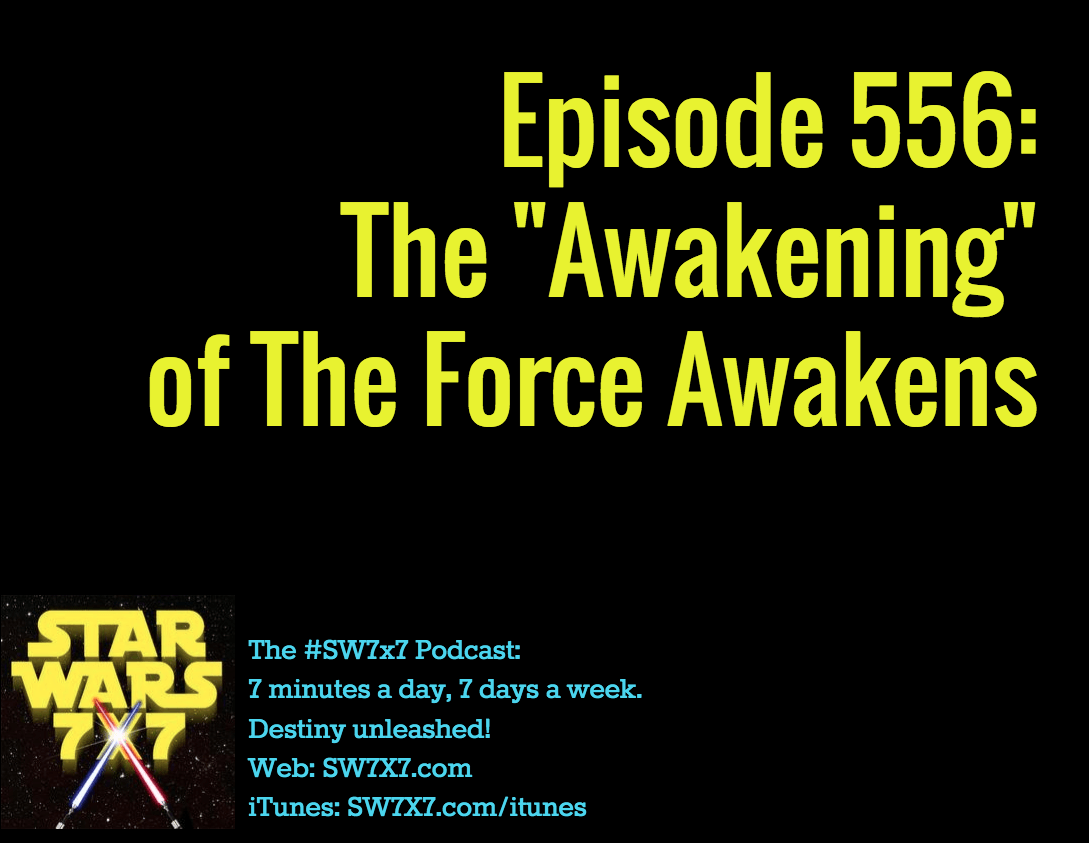 There’s a great article on /Film by Peter Sciretta entitled, “When Exactly Does the Awakening Happen in The Force Awakens?” that inspired this episode, and Peter addresses a ton of different angles – from the events of the movie itself to the marketing and titling decisions (the meta of the movie, if you will).

The thing he and I both wind up at is the Falcon chase, and that being the awakening situation. I’d like to drill down even further, and suggest that the moment when Rey is in the cockpit, takes a breath and says, “I can do this” – that right there is the moment of the awakening, in my humble opinion.

Peter references The Force Awakens Visual Dictionary and a passage there about “The Awakening” on the pages about Rey, and here’s what it says:

Since the disappearance of Luke Skywalker and the shattering of his fledgling Jedi following, the cosmic Force has lain dormant, seemingly quieted to those able to sense its presence. The adventures of Rey and Finn on Jakku coincide with a turbulence in the cosmic Force, a sudden ripple indicating the awakening of newfound ability. With the Jedi and their records vanished, few – other than Kylo Ren and his mysterious master – are able to appreciate this occurrence.

So Rey’s awakening is like the dropping of a rock in a glassy pond, as it were. That moment – the “I can do this moment” – I think is the equivalent of what we see at the end of the movie, with Kylo pressing Rey at the edge of the cliff, and her tapping into the Force. That happens in slow motion for us to appreciate dramatically. But I think, in real time, it happened as fast as her saying, “I can do this” back on Jakku. For my money, that’s the exact moment of the “Awakening.”

And yes, as Peter suggests, the title of the movie itself likely has multiple meanings. Personally, my favorite awakening is R2-D2’s. Insulting C-3PO from the get-go? Priceless. Can’t wait to see what he does in Episode VIII.

Today’s question: What’s the name of the leader of the Guavian Death Gang, who comes to confront Han and Chewie about the loan to them?