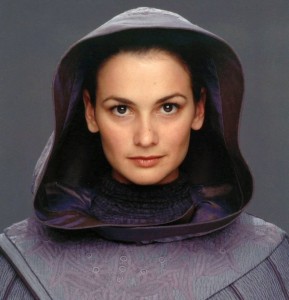 Happy birthday to the lovely Kristy Wright, who played Moteé, a handmaiden to Padme Amidala, in Revenge of the Sith. Who’s YOUR favorite handmaiden? Or can you tell the difference between any of them? Have your say in the comments!

They say “you never know what tomorrow brings”, but we do; it’s probably a Sith Lord or a moon sized battle station to screw your day up.

Today’s question: Who decided to get inside the escape pod after being shaken by one too many blaster bolts?

The Internet as we know it has been around for about 20 years, and it probably won’t surprise you to know that Star Wars fandom flourished from the early days. Any discussion of fan sites and communities has to start with TheForce.net.

It started, like any good venture from a college dorm room in 1996, and today, if you want to know what’s going on in the Star Wars universe, this is a one-stop shop for everything from movies to TV, books to video games, and much much more.

As I mentioned in yesterday’s episode, this week we’re focusing on the fan communities, and TheForce.net hosts a HUGE fan community in their Jedi Council forums. As of this recording, here are their forum stats: 442,442 discussions, with 22,247,000 posts from 251,489 members. Well, 251,490, since I just joined.

It’s that kind of thing that blows me away. 22 million posts? That’s amazing, beautiful, and every other positive adjective you could think of. That’s 22 million bursts of joy being expressed online.

The forums cover every bit of fandom imaginable – original trilogy, prequel trilogy, sequel trilogy, television, books, comics, games, role-playing, fan fiction, and on and on. Here’s just a sample of what I love.

The fourth version of the Star Wars Quote Game. This thread started because the previous Quote Game thread got “too long,” so they had to start a new one. And the amazing thing is, the current version, which is not “too long,” is approaching 25,000 entries! Here are the last five, to give you an idea of what a fun mashup this is.

“If what you have told me is true, then you have gained my trust.”

“With your kind permission, I should like some fuel and to use your city as a base as I search nearby systems for General Grievous.”

“Walking into the detention area is not what I had in mind.”

If you’re like me, you’re trying to identify them all on the fly, right?

Unpopular Star Wars Opinions. It’s a forum where people get to express, without fear of reprisal, all the minority opinions that would get them flamed across the general internet. I hold some minority opinions (liking the prequel trilogies, for example), but there are some out there that really surprised me. I want to talk to people who say they think Hayden Christensen’s acting around the death of his mother and the killing of the Sand People was so good. I don’t agree with it, but I’m totally interested to hear why they think that, not to argue with them or change their minds, just to hear the rationale!

The best thing about the forums, though – well, maybe not the best thing, but still an important thing – is that you can be a lurker and still have an experience. Okay, that sounds a little creepy! But what I mean is that because the forums and conversations are open, you can read any thread you want, dive into any topic, and still enjoy the heck out of your Star Wars experience. Hey, you could be mindlessly searching Netflix for some third-rate entertainment once you’ve finished binge-watching The Clone Wars, or you could get first-rate enjoyment from the Jedi Council forums. No brainer.