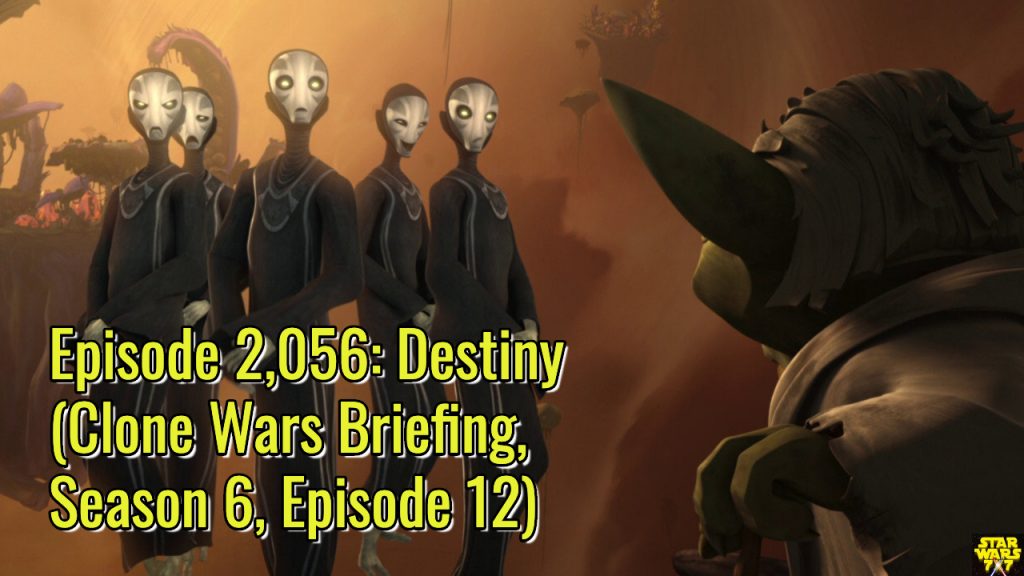 “Destiny” is season 6, episode 12 from the Clone Wars, the third part of a four-episode story are, and the penultimate episode of the Clone Wars – at least, until season 7 debuts on Friday.

From what we know about season 7 so far, it doesn’t initially seem like this final season 6 story arc will affect the events of season 7 very much. And we know two of the three story arcs so far – the Bad Batch arc, and the Siege of Mandalore arc. What the third one is, is still a mystery at this point.

Meanwhile, speaking of mysteries, “Destiny” dives deeply into the mysteries of the Living Force and the Cosmic Force, as Yoda travels to one of the purported wellsprings of life to learn how to preserve his identity after death. There, he encounters the five Force Priestesses – Confusion, Anger, Sadness, Joy, and Serenity. (Makes you wonder if the Pixar movie Inside Out took any inspiration from this!) And even though they argue about whether to train Yoda, the fact remains that his destiny is already set, and he is supposed to teach someone who will eventually save the universe from a great imbalance.

You could argue that this is a reference to Luke Skywalker, and you could also argue that Yoda did it twice with him. Which I will, in fact, argue in this episode, as well as break down the details you need to know before the finale. Punch it!